Well, almost: one’s a 55mm. I recently acquired a vintage lens I have long coveted – the Asahi Pentax Super-Takumar 55mm 1.8.

This means I am now the proud owner of a collection of 1960s-1980s 50mm lenses from what I consider the five leading consumer SLR brands of the 1970s, namely : Minolta, Olympus, Canon, Nikon and Pentax.

The Pentax is a M42 thread mount for which I have, alas, no current film camera body. The other lenses all have some body to love them. And I also have an adaptor for all of them which allows me to mount them on my Sony A7ii

I have read and watched many reviews of my newly-acquired Pentax 55mm and wanted to try it immediately on my Sony. I don’t know whether I was predisposed to love it, but I love it. It has an ethereal quality that has to be seen to appreciate. Will this now be my go to 50mm?

“Why not?”, I hear you ask. Well, two main reasons. Firstly, I was disappointed at the flaring I was seeing in my viewfinder and on my images if there were high contrast images in the photo, chiefly part sky, part darker foreground – I just got low contrast streak. Maybe the lens requires a lens hood. I don;t think so. I believe there is an inherent fault with this lens, either this particular copy or the lens generally. I think the copy I have is a 1960s one; it may be that after lenses reduced this flaring. However, if you remove strong contrast, the lens is stellar. The second reason is that I prefer to adapt my Canon nifty-fifty for any 50mm shots – which are usually portraits. Or any shot where I want a good wide aperture. The Sony only gives me f4. The modern 50mm is sharper and auto-focus and also very light. The vintage lenses I would use on SLRs or choose one for its general colour characteristics just for a bit of fun.

As a portrait lens the Super-Takumar is subtle and dreamy. The 55mm appears to have a bit of an advantage over the other 50mm lenses in terms of separation, fall-off or bokeh.

So I thought I’d try an experiment.  Tripod out. All lenses out. All adaptors out. Find a nice subject in the garden: a penstemon. Take the same shot at widest aperture (1.8 or 1.7 for the vintage lenses) and f4 for my Sony 28-105mm at approx 55mm.

The results are shown below.

What do you think? Can you tell which is which? Which is most pleasing. One issue I encountered was that minimum focussing distance varied and, therefore, fall-off also.

For a a larger image click on a thumbnail. 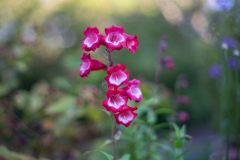 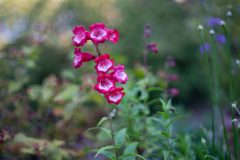 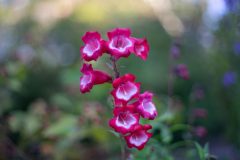 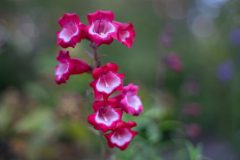 But what do I think?

Firstly, not all these lenses focus down to the same distance. The 55mm Pentax  obviously looks the closest anyway because it is  has a 10% greater focal length and I used the same position to take all the images.

Secondly, all these images are straight from the camera without any correction.

Let’s get sharpness out of the way. Clearly, a high quality modern lens is going to be sharper. The Canon is probably the sharpest vintage lens here but all are acceptable. Since a vintage lens is more about ‘the look’, the individual quality the lens provides. This can be contrast, colour rendition, background out of focus quality. It is, of course, subjective. I could easily put these through Lightroom or Photoshop and make them all look similar. That’s not the point.

Look at the Sony image. Sharp, true colour, saturated and a bit boring.

For me, the Olympus has the least character but lovely background smoothness; it seems to be the closest 50mm in terms of focussing ability; it’s a very nice lens. The Canon has the truest colour and is sharpest of the vintage group at full open, although this is marginal. The Nikon does not focus very closely and this affects its fall-off quality. I do love the lens though and would use it adapted very happily. The Minolta is the lens I have had the longest (since 1974) – seems to be a good all-rounder and certainly holds its own against the rest.

So that leaves the 55mm Pentax. It has a quality that is very distinct. The background smoothness is delightful. It’s pretty sharp but, then, I think they all are, especially once stopped down a bit. The extra 5mm reach seems to give it quite a different character.

Maybe the Pentax’s novelty makes it my current favourite. Time will tell. Of course, one can go on ‘testing’ lenses for ever and comparing them and I’m sure there will be a website somewhere that makes a scientific comparison. But let me stress: I don’t care which is the sharpest, I want to decide which to take around with me, which to use for different effects and so on. Does that actually matter when we can do so much in post these days? Change colours, sharpness, contrast, dodge and burn, selective edits – you name it.

I like the Pentax because it is decidedly different to the others, all of which I obtained to use on analogue SLR’s. Adapting them is a bit of fun. I also have a Canon 50mm 1.8 t(nifty fifty) that can auto-focus, that it super sharp and very light. Why do I even need to consider a vintage one? It’s perhaps about the experience. Putting to use something which appears to be defunct but can be used to produce great images still. It’s about the look; it’s about the feel; the way it focuses, using it on Manual, getting down to the nitty-gritty of photography with either an SLR or a modern mirrorless. Very different experiences.

I sometimes think that modern cameras have greatly complicated what used to be straightforward. perhaps these lenses remind us that it’s all about the image, the idea and the person behind the lens. It should not just be about the equipment.

Fomapan 200, a Nikon FM2 and the Irwell Valley